Our Mirra doll dress is designed with bright fabrics and beautiful colors. Stories of Indian girls, power & strength, and modesty come together to create this unique dress.

This 18″ doll dress has a Spanish ruffle crossing from the right shoulder to the left hem. This ruffle is a symbol of power & strength. The sari part of the dress includes busy & colorful fabrics, silk fabrics, pleats, and a wrap-like effect.

MayBoo Clothing dresses incorporate modesty, comfort, and beauty (yes, even for dolls). Each of these values is especially thought of in each dress.

Our Mirra doll dress has a gorgeous ruffle spanning from the left shoulder to the hem on the opposite side. It has a left-side pleat under the ruffle as an attribute of the sari. The bright, colorful fabrics top off the look and complete this exotic dress. It’s a zip-up easy put on and is comfortable and durable.

This dress includes ancient and symbolic attributes that originate from stories of actual women who maintained their tradition and uniqueness. The dress has an easy slip-on design, and of course, a beautiful blend of colors and styles.

MayBoo Clothing dresses incorporate modesty, comfort, and beauty (yes, even for dolls). Each of these values is carefully integrated into each of our dresses.

The sari was first documented in an ancient piece of literature called the Vedas. Not only does this mean that the sari is over 5000 years ago (documented around 3000 BC), but that it could be older. It has been in style for ages, unlike most styles and outfits that only last 2-20 years. Wow!

The sari is currently worn in several countries like Egypt, Bangladesh, and Assyria, but is mostly known to be from and used in India. It’s popular throughout the world.

It is traditionally full of beautiful colors and patterns, decorated with beads and pearls. The sari has changed so much over time and gone through several dynasties and its history is a roller coaster of different styles and eras. The Indian sari now is a (usually 9ft) piece of cloth draped to form a dress-like traditional Indian outfit, but our outfit is easy to put on and wear as it’s a zip-up style.

The Spanish ruffle in the 16th century was worn by men as a symbol of power and strength. Ruffled cuffs, shirts, and vests were commonly worn among those who were in a position of power and ‘ruffs’ were often a distinction of class and station.

Now, centuries later, MayBoo Clothing believes the meaning has not changed. This dress is a constant reminder to every girl who wears it that they can withstand forces and do hard things. This dress is the statement of “you are strong and powerful”!

There are no reviews yet. 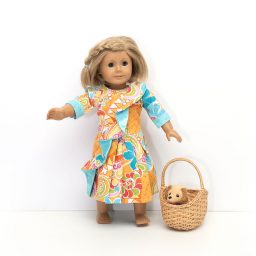