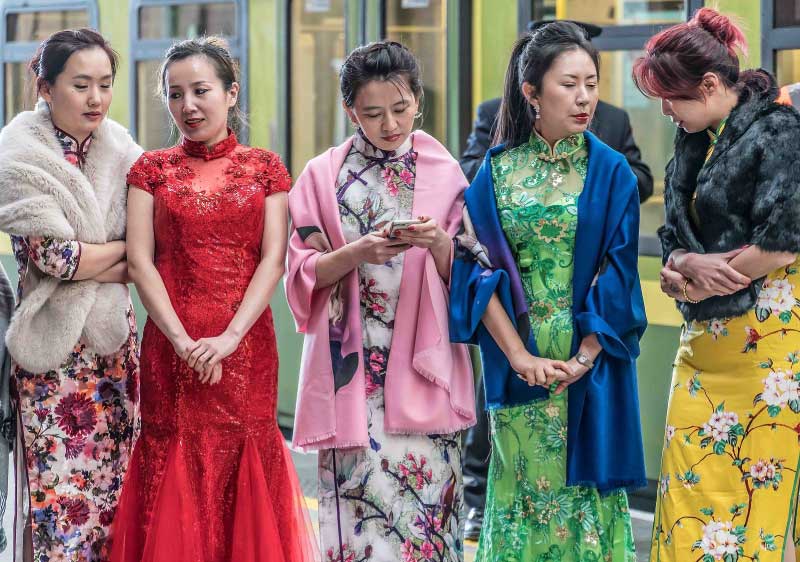 I have always been intrigued by the Chinese culture and especially the symbolic qipao. It has so many different features and an interesting past. The changes in it have been immense and drastic. Here’s what I have found about the qipao and its story!

The qipao (or more commonly known as the cheongsam) started way back in the 17th century during the Manchu period where the old styles of various expensive and exquisite dresses were overthrown and style (especially clothes) changed dramatically. Before, the style was for open sleeves and long, flowy skirts leading to a high and tiny waist (think Mulan style). The more ornate and glorious the dress, the higher your rank.

Since 1644 AD, the wide variety of dresses and ornaments were all narrowed down to the qipao. The qipao was part of the new and it was an everyday thing to wear especially among the rich as it was a symbol of wealth and literacy. It too was a measure of rank and authority.

When it was first invented it was nothing like the qipao we know today. It was baggier and covered almost everything. The dress was adopted and worn in surrounding countries such as Hong Kong and Taiwan. It changed over time every ten years or so through the 1920s to the 1950s and is now the tight-fitting, high-collared, slitted-skit dress we know today.

The cheongsam has become less common and nowadays it is (except if it’s the uniform for a job or schools) only worn for special occasions. Instead of wearing the cheongsam in all it’s glory, small pieces of the dress are adopted into everyday styles throughout the western world weather it be the color, fabric, or design. Great elements that are added into western clothing include collars (tall or short), slits, unique necklines, and pencil skirts. As an example, Pierre Cardin, a French clothing designer, remarked that the cheongsam significantly influenced the design of his formal gowns (evening dresses).

The literal meaning of Qipao is ‘banner gown’. As mentioned before, it used to be a sign of wealth and literacy in the 1600s, but is now a formal dress symbolizing beauty and elegance and is seldom worn except for special occasions such as weddings and formal parties.

How The Qipao Has Changed

When the qipao started, it covered all skin except for head, hands, and toes. It was a rather baggy and loose-fitting dress with robe-like sleeves and full-length. Trousers were worn underneath the gown too.

Little changes were often made, but around the 1920s, the styles of the western world mixed more than ever with the Chinese qipao. The loose dress shrunk into a more and more form-fitting dress as it also got shorter and shorter. The trousers were long gone, replaced by stockings.

In the 1930s, the sleeve changed too. Bell-sleeves, cap-sleeves, even sleeveless. This is when the collar arrived. These tall collars that were and are still today so unique and iconic.

In the 1950s, the qipao lost popularity and was seldom ever worn, but two decades (20 years) later, came back to life and is now recognized worldwide as a Chinese symbol.

Patterns can range from embroidered florals, dragons, or any other colorful addition. There are lots of variations and options among patterns, colors, sleeve lengths, hem lengths, collar height, and neckline.

As only the wealthy had qipaos in the 17th century, all qipaos were made of precious and expensive silks. At the time the western styles rolled around, everyone wore the cheongsam daily and cheaper fabrics like satin, brocade, and cotton prints were also qipao Materials along with silk (which was and still is common).

The cheongsam’s most popular colors are red (signifying fertility, luck, joy, and happiness) yellow (signifying power, authority, and prosperity), and white (signifying purity and innocence) as can be expected since those are the most common throughout the country.

The iconic collar of the cheongsam comes in a variety of heights and designs. At one time (in the 1910s), collars were so incredibly high that they reached the bottom of the ear. In contrast, the 1940s led to collars comparatively short (only a few centimeters to an inch tall). typically nowadays, a collar will range from 1.5″-3″ tall.

Mostly every collar meets in the middle with fancy buttons or other fasteners while some don’t even meet at the very ends. But there is one defining thing that makes the qipao collar so very unique; the open corners are rounded.

The large front is that strip of standout fabric or other material that runs from the bottom of the collar and to the armpit (usually the right side). This too can vary in color and style. For instance, curved or double-curved? Straight or angular? A standout color or one that blends in?

The original qipao sleeves, as mentioned before, cuffed at the wrist and were loose and baggie.

In the 1920s, sleeves (being influenced by the west) became more and more open until the sleeves were long bell sleeves, open at the bottom.

Over the next two decades (1930-50s) sleeves shrunk. 3/4, mid-length, short, caped, and then no sleeves (sleeveless). Especially during hot summers, everyone wore capped sleeves or sleeveless.

However, no matter how much western styles affected the sleeves of the cheongsam, they retained some uniqueness. Western styles carry a joining seam on their shoulders, but the qipao (being one piece of fabric instead of two) doesn’t have that. The cheongsam’s sleeves are more rounded more and shaped a bit differently.

The Qipao Skirt and Slit

Never had slits been put into the qipao or anything close to it for that matter. So it was surprising and new indeed when, in the 1930s, slits appeared creeping up the leg even up to the thigh. The dresses at that time were still floor-length at the time.